The V-separator is widely adopted for processing of comminuted material mainly for closed circuit systems with roller presses. It is really static and energy saving apparatus that has high reliability in operation. It also realizes the function of disaggregation of material cakes after its roll’s compacting. Cakes fall down by slanted step grate of the separator. They are divided into parts and scavenged by transversal airflow. Small parts were carried by flow to the top output of separator and coarse ones fall down and turn to repeated disintegration.

Never the less disaggregation property of dynamic separator is better than V-separator due the advantage of centrifugal force in comparison with gravitation one. That is why it is necessary to improve the disaggregation of crushed material inside V-separator for the sake of its efficiency increasing. Now it is possible to achieve by using of electro neutralization technology according patent DE 698 09 251 T2.

All changes in nature are accompanying by any electric phenomenon. This is right for disintegration of heterogeneous materials too. The process of distraction of a solid body is not only a mechanic process of its partition, but is accompanied by an electro physical phenomenon due the breaches of double electric layers of contacting phases of such material. The fresh surface of comminuted material dynamically becomes nonequilibrium and excited. As a result electric charge appears on the surface of particles that are the cause of adhesion process between them (Fig. 1)

Cakes of pressed materials have many cracks inside between particles of different sizes. Some cracks of small sized particles cannot be opened inside a separator because of adhesion. These particles adhere to big ones and decrease the separator efficiency. 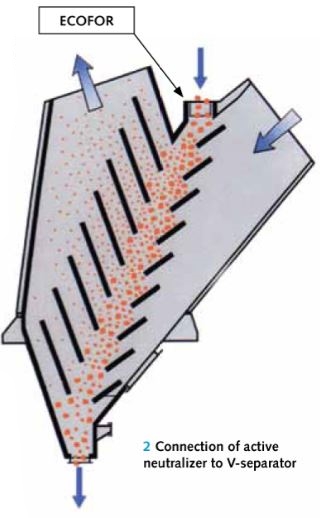 Prevention of the effect of electrostatic components is carried out by the active neutralizer-device ECOFOR. It is connected to the metal of the coupling flange of the material feeding of V-separators (Fig. 2).

A positive charge of comminuted material is actively discharged by an active neutralizer and relaxed in grounding through falling of material by slanted metal step grate. As a result additional part of small size powder is passed away by the same airflow to the finish ball mill or its dynamic separator.

In 2010 such test for electro neutralization of comminuted material inside V-separator was realized in Turkey at AkcanSA Cimento (Buyukgekmece). During the test particle size distribution of returned fraction after V-separator was analyzed by laser granulometer. The load of return transporter was also checked and became less during one hour after turning on of active neutralizer. The comparison of particle size distribution for returned fractions under stable conditions of roller-press (Fig. 3) has discovered that part of particles in size range from 10 to 100 μm was decreased by 22 % under active neutralizer influence. These particles were transported by airflow to the finish mill but not to repeat crushing as it was before. Such improving of V-separators efficiency has allowed to increase capacity of grinding systems of Turkish cement plants: AkcanSA Cimento (Buyukcekmece) from 125 to 140 t/h, Mardin Oyak Cimento from 102 to 110 t/h and CimSA Nigde Cimento from 128 to 138 t/h. 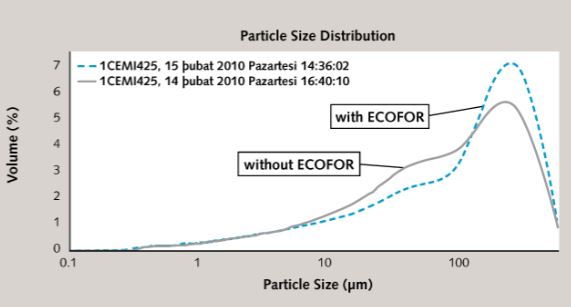 3 Particle size distribution of returned fraction after the V-separator

V-separators are sufficiently used for grinding. Now their efficiency can be increased by active neutralizers not only for new deliveries but for exploited grinding systems too.